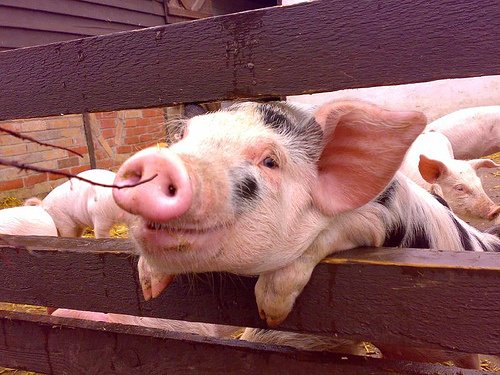 As I climbed the steel ladder lashed to the side of the toilet block, heels slipping on the rungs, I wondered why I had ever thought that “go-anywhere opera’ was a good idea.

The brief had been simple; a covered market wanted us to christen their new toilet block. (“Sing some Puccini,” quipped the booker). The concept was fine until we realised that the only way onto the top of said facility was via a temporary ladder, for us in full regalia, the pianist and the digital piano.

Once up there, we couldn’t be seen from the ground either, so we performed hanging off the safety rail like monkeys with one hand, desperately waving hand signals to the pianist with the other.

Over the years we’ve become used to weird venues, which often appear under the guise of ‘accessibility’.  After one particularly arduous day singing in a Birmingham shopping arcade in howling wind and foul weather, our final task was to sing in local restaurants. The Italian was fine, the Japanese more of a challenge, since we were competing with ‘cook it in front of you’ chefs armed with flying machetes and a chopping action as rapid and loud as machine gun fire.  After twenty minutes of singing against slicing and sizzling, the food Samurai won, and we gave in to the delights of tempura and teriyaki instead.

Libraries are more of a mental challenge; years of silence enforcement by shushing librarians have to be put aside as you sing as loudly as possible in venues designed to deaden sound as much as possible.  In one library, the book racks doubled as wings, and since this was the only area to change, I remembered to keep my head down so as not to be seen.  What I didn’t realise until later was that I was stripping off behind a single row of Cookery, and most of the Delia collection was out, leaving an interesting window of opportunity for the front row.

Fundraising events for charity can land you in places you never dreamed of, such as a Swindon fire station. The firemen had cleared the engine garage, and put up a stage, lighting, seating, even balloons.  We were just wondering where the fire engines were, when the call came.  Six burly firemen slid down the pole next to the stage, (just like Trumpton!), and rushed into the night, sirens blazing, minutes before we started singing.  Amazingly, they were back in time to serve baked potatoes and tea in the interval.

A more usual fundraising or party venue is the great British marquee.  One exuberant host had got every mod con for his April bash; decent lighting, good flooring, swags, flowers, flounces, and a state of the art heating system that looked (and sounded) like a jet engine.  “It’ll be fine’, the host beamed as he proudly demonstrated the full throttle setting, “So long as the wind doesn’t change direction.” Which of course it did, so everyone’s noses soon knew that the hosts did indeed run a very large pig farm…