Live in the lounge: singing at private homes

For extra special occasions, private clients often invite us to come and entertain in their homes. From grand mansions to semi-detached, farm houses to marquees on the back patio, we love entertaining guests in these intimate places.

High & Over: building a house in music 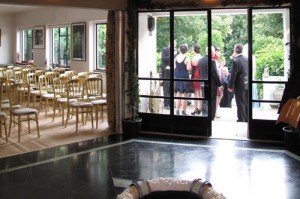 When K and P asked us to create a programme to celebrate their wedding anniversary and the remodelling of their landmark Art Deco house near Amersham, they requested music from the time of the house’s construction, 1929-1931.

While this might have been a golden age for new houses, it sadly wasn’t a great period for newly composed opera that has remained in repertoire. 1929 saw new operas by Giordano, Hindesmith and Vaughan Williams and Janacek’s “From the House of the Dead” in 1930, but nothing we thought suitable for a party!

So, we decided to think beyond the box, and recreate the musical scene of the times. Our selection started with opera you would have heard had you donned your furs or top hat, and hopped on the Met Line into London.

Hot tickets for 1930
1929 was a pivotal year for opera in Britain, with major changes in the companies performing opera. In 1929, the British National Opera Company went into liquidation after a tax bill of £17,000, a vast sum. Formed by Sir Thomas Beecham in 1920, the company has performed at the Covent Garden Opera House, and attracted major stars such as Maggie Teyte and Dame Nellie Melba.

From 1929 to 1931, the Royal Opera House promoted winter and summer seasons of opera and ballet, while between seasons the theatre was either closed or used for film shows, dancing, cabaret and lectures. The biggest names in opera came to perform, including Benjamin Gigli, the highest paid tenor in the world at that time. And in 1930, the hottest ticket in town would have been to hear the great American diva Rosa Ponsella sing her first Violetta at the Royal Opera House.

Just across London, another opera company was presenting opera week in, week out – Lillian Baylis’s Old Vic company. Alternating programmes of opera, ballet and theatre were presented with rising stars on stage such as John Gielgud, Ralph Richardson and Peggy Ashcroft, so you would have headed for the Old Vic to hear favourites such as “La bohème” in rep.

Musicals, reviews and revivals
Meanwhile, new musical styles were emerging in Europe, and the musical form was maturing on Broadway into what we recognise today. In the UK, it was the older style musicals and musical reviews that dominated, with record sales and sheet music sales holding their own even during the Depression era.

Looking at record sales charts from the period, it becomes clear that records of popular songs sold from year to year, rather than just for months, and older popular songs keep making comebacks. What’s more, the film musicals made songs instant hits, and revived interest in older songs too, making the whole recoded music scene a mix of the modern, the old and the downright odd!

So, our second set focussed on this popular music that you might have sung or played at home in 1929-31, including items from the master songwriters of the era, the Gershwins, Noel Coward, Ivor Novello and Cole Porter. It also included some rarities we’d unearthed, just for fun.

Singing round in circles

The setting for the performance was the circular hallway, recently reguilded and complete with small fountain at the centre.

The audience were seated on two sides in two separate rooms filled with chairs, and the pianist was directly behind us playing a completely restored Steinway concert grand!

Directly ahead of us were the glass doors to the garden, so the challenge was to keep the audience engaged and not to constantly face or sing towards the trees…

The evening was a tremendous success, and the guests very much enjoyed the experience, even dressing up for the occasion. K & P were perfect hosts to us too, giving us our own mini suite of rooms to change in and rest in between sets, when the guests ate dinner in the marquee by the circular swimming pool.

And if we all felt we had been there before, the house was a location in the ‘Poirot’ TV series, in the ‘King of Clubs’ episode! We’ve since seen it again in a January 2017 episode of ‘Midsomer Murders’, looking just as lovely as when we sung there.

Back to Case Studies page