Gilbert and Sullivan is like Marmite: you either love ‘em or loath ‘em. I am firmly in the former camp, and blame my mother for this dangerous affliction. It was she who took me to see “The Pirates of Penzance”, presented by the local operatics, at the tender age of seven. I returned home, and sang through everything I could remember. Which, unfortunately, only transpired to be a few bars of “Poor Wandering One” plus a bit of “Cat-Like Tread”, which I repeated ad nauseam for the next week, varying pitch and tempi as I saw fit. (Some habits don’t change.)

It was an inspired move by the same operatic society years later to found a Junior Section, but with the average participant aged under 16, tenors were in short supply. (Please don’t say I have to explain this one.) So the director of the first full production, which was by a spooky co-incidence, “Pirates”, looked for the tallest, most flat-chested, gullible girl they could find to play Frederick. (I’ve changed a bit since those days; I’m not longer quite so gullible.) 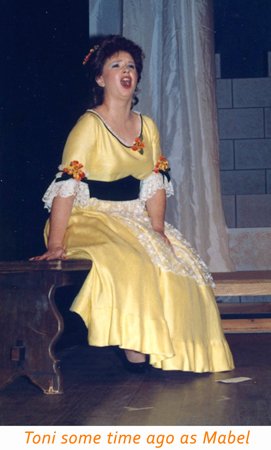 Come opening night, on a stage barely bigger than the average dining room, I duly swashed my buckle and serenaded my Mabel, the only girl in the Junior Section taller than me. I was completely hooked.

After a brief flirtation with aesthetics (third droopy drawers from the left in “Patience”), I got my big break, Phyllis in “Iolanthe”. Delighted, I rushed home with the score, to discover that Phyllis is the only G&S soprano juvenile lead with no aria whatsoever, and although you do end up with the leading man, he is half fairy. (In hindsight, this was probably good preparation for life as a single female in the singing profession.)

One G&S that follows me around with amazing regularity is “H.M.S. Pinafore”, and this short satire was my first professional G&S tour. Despite the fact that the chorus were supposed to be boatloads of sisters, cousins and aunts of the aging Sir Joseph Porter, we were all bright young things, all ten of us, total. This was fine in smaller theatres but an issue when we came to the vast semi-circle of St David’s Hall in Cardiff. “Fill the back, altos,” cried the choreographer, as the four of us on the lower line puffed out our petticoats and ourselves as much as possible. (Three of my operatic society altos could have easily filled the back of that stage. Standing shoulder to shoulder…)

I think G&S is like Star Trek; it suffers from the image of its fans. Anoraks are almost obligatory if you enjoy Gilbert and Sullivan, and I’ve worked with enough of them to know that a misplaced “and” instead of “an” can bring retribution down on your head like a flight of thunderbolts. A tip here; just say, “Ah well, we’re using the 18blahblah New York pirated version, of course” and make your escape whilst the anorak is looking it up in the doorstop sized libretto he has brought along to study during your performance.

The best G&S performances I have ever done are when people are not expecting any G&S at all, and come for a nice night out. Then they accept the Savoy operettas at face value, as escapist, fun shows with lyrics that can still raise a wry smile, if not gales of laughter. They enjoy seeing pompous pirates, crazy cops and social-climbing sailors as much as their forefathers did, and so do their kids. If Gilbert and Sullivan is to survive for a new generation, forget the updates and modern settings, just concentrate on the stories. After all, John Wellington Wells was casting spells long before Dumbledore or Harry… 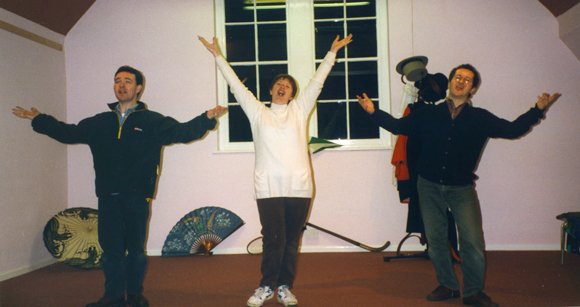