A quick rant by our Soprano Toni

Recently Katherine Jenkins called the press to ‘The Ritz’ to announce her new record deal.The ensuing response showed that the cliché “classical music snob” is still alive and kicking (again!).

Jenkins stated that she believed the ‘crossover’ genre has really developed int he last 5 years. Yes, I would have to agree with that, there are many types of songs and singers who now fall into that category and are extremely popular and many have done good things for classical music. But don’t think this is a new phenomenon!

The press conference though, gave Katherine the chance, again, to claim that she is making opera popular – yawn! Why do we always seem to come to this point again, and again?.

The Telegraph’s Hannah Furness decided to stir things up and follow Jenkin’s ethos with a piece title:“Katherine Jenkins: why classical music snobs are wrong”.

This piece then led to a blog by Alexandra Wilson in The Guardian: “We need to move beyond the cliches about ‘elitist’ opera” . Here, Alexandra shows a photo of “Opera Up Close” in the London pub, discusses the fact that opera was the pop music of its time, and reminds us of ‘A time when opera parodies were all the rage because everyone knew the operas enough to get the jokes’. 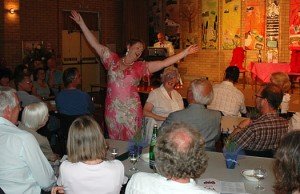 Somehow all this past history seems to be forgotten once again when the cliché comes to town! I honestly think all of us are a bit tired of it and really just want to have good quality entertainment and exposure to a variety of musical genres let alone other art-forms. Did you see Wayne Sleep’s Big Ballet on TV recently?  I think that there are many in the ballet world who probably have the same sort of feeling as we have in opera.

If you have the time and want to get in on the discussion look at Alexandra’s blog as well OBERTO, OXFORD BROOKES: EXPLORING RESEARCH TRENDS IN OPERA