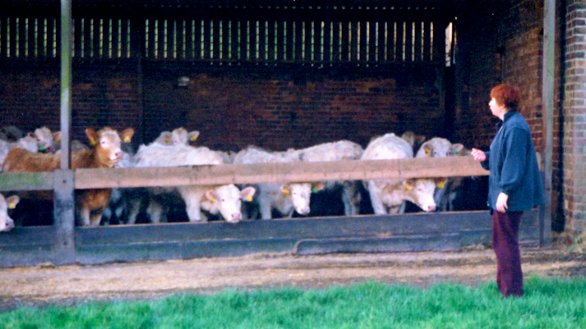 Don’t work with children or animals, the old adage suggests, but any working singer knows that if you’re to pay the mortgage, all that goes out the window.

Given the choice between kids and rampaging animals, I’m with the non-humans every time. They are far more appreciative, as my long-standing investigations into “The effects of the operatic voice on domestic animals and farm livestock” have shown.

It’s not very scientific, but it was born of necessity. If you’re on tour with a house load of singers, and one starts practising, the whole damn lot start up like panicked chickens in a coup. Toni and I long ago realised that the best practice space, weather permitting, was outside; fresh air, great scenery, and no tenor leaning over your shoulder sucking his teeth at any bum notes.

The down side, of course, is that outside can be a farmyard, complete with mud, aromas and livestock. (Well, you try finding good, inexpensive self catering accommodation for six in Lincolnshire that isn’t a farm…)  Toni soon discovered that the heifers in the barn opposite were a very warm and appreciative (if aromatic) audience. They gently mood their appreciation for Tosca, La Rondine and Bohème, and for me, even contentedly chewed through Carmen. (We tried Wagner but it only added to the slurry…)

Sheep, however, are another matter; sheep don’t give a stuff. You sing for them, they give you a withering look, and turn their tails to you in disgust. They have far better things to do than listen, unless it’s Handel of course; “All we like sheep…”

In fact, Toni should have been forewarned about our woolly friends. In a memorably awful production of Zauberflöte, the director decided that Tamino would tame real animals. So on came the donkey and sheep, all good as gold, except one that decided it was a tenor. It stuck its head between the flats, dead centre stage, fixed the conductor with a steely gaze, and emitted a long and perfectly modulated “Baa!” The audience went wild…

Of course, that also meant that there had to be a horse for the Queen of the Night. And Sarastro. Problem was, the Queen (Toni) was 5’4” and the Sarastro 6’1”, neither rode, and there was only cash for one horse. OK, one small pony. So the Toni perched on top, whilst the Sarastro not so much rode the pony as stood over it, legs akimbo. The pony obviously did not think it was making enough of an impression (probably because the audience was helpless by this stage) so it enlarged its role by accompanying any singing with resplendent and sonorous farts. This was a Flute in Glorious Smello-Vision.

Birds are a mixed bag. Chickens find the whole thing rather confusing, on the whole, and try to join in, so we tend to leave them to their egg business. Flocks of birds make nice backdrops, but pigeons are just plain dangerous. It was with much trepidation that I took on an open-air performance in Trafalgar Square, but I needn’t have worried. Just as it’s been proved that Pavarotti’s singing deters crime on the Tube, I can officially declare that soprano top notes scare off pigeons. It did also stop traffic, but you can’t have everything…