“We’ve decorated the stage”, the fleece-clad hearty host informed us, “thought it would brighten it up a bit.” Now the rest of the hall may be barren, but the stage is a triumph of tinsel over taste. Every millimetre of hanging space has been used, with baubles, streamers and Unidentified Fire-retardant Objects hanging down from the stage curtain track. Which is less than seven foot above our heads. And our tenor is six foot three. He spends the entire show dodging the dangles or singing love duets with tinsel up his tonsils. Did I mention the glitter ball? Best not to…

It’s difficult not to become a singing humbug at Christmas. Our carol-singing season begins promptly on December 1st and by the 16th we’re pretty much wishing for a Silent Night. In fact, I’ve had great success marketing season shows performed after the 16th watershed as carol-free zones. Well, almost carol free. We always include the Coventry Carol regardless, because it reminds us just how moving music can be. I have to warn performers that when we sing this unaccompanied, at least two women in the audience will cry. This tune touches hearts; one old lady toddled up and told me of all the friends she lost the night when Coventry was bombed. It’s amazing that a simple tune brings all that flooding back.

It’s always nice when the audience join in with the carols. It gives us a rest. One December, we found ourselves performing perilously close to the Welsh border, and that always means the audience contains singers. In fact, this audience were so damn good, that when we missed an entry, they came in instead. We admitted defeat, sat down in the front row, and they sang the piece. That’s lovely, now. 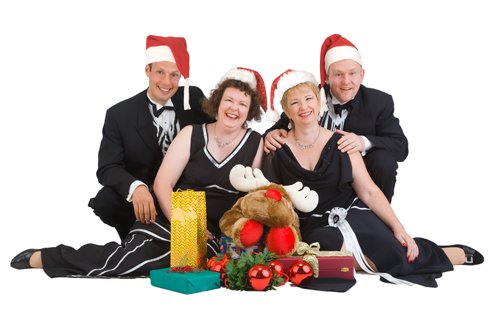 We’ve even been evicted from the stage at one venue to make way for Santa’s grotto. We know our place. Usually it’s somewhere wedged between the enormous Christmas tree and the WI flower arrangement that CANNOT (note) CANNOT be moved. I would be lynched if I revealed just how many times they have been moved once the arranger has left. You see, those elegant wrought iron flower towers are great when nobody moves; they stay nice and still, but performers don’t. We move, wave our arms around, and act (heaven forbid). Still, venues insist on putting us (and flowers) on springy wooden stages. We’ve performed on platforms so bouncy that the pianist had to hold onto the grand piano as the cast jigged the G&S Riverdance routine (don’t ask). Flower towers don’t survive this excitement, toppling artistically stage left as you exit stage right, necessitating football-style fielding to catch it.

What is it about Christmas and candles? We do lots of cabaret style performances and there is a norm of one candle per table. Looks lovely, twinkly without being excessive. However, one year, our upmarket holiday village venue had tables around the seated audience covered in candles. And I mean, covered. There were hundreds, so many that each table had its own member of staff with a fire extinguisher, (for that authentic, relaxed seasonal atmosphere). We had to move really slowly because the slightest draft caused a wave of flickering flames and a cascade of wax. The irony was, the only place that wasn’t lit was the stage, so we sang, peering like a quizzical Anne Robinson at our music, wishing we hadn’t been asked to do the complicated carol-fest with at least three verses to each.

The trip home, however, was to savour. Leaving some very happy campers at 5pm, we made our way across the width of the country on empty roads. We stopped at a pub for a bite to eat, and weren’t let out until we’d eaten half a turkey with all the trimmings and sung “While Shepherds Washed” for the kids. We arrived at my brother’s house to the smell of mulled wine and a very excited niece, who watched us unpack costumes, music, bedding and presents with ever-widening eyes. As we finally unloaded the digital piano it all became too much. “Is that my present?” she breathed excitedly. Nice try, kid.