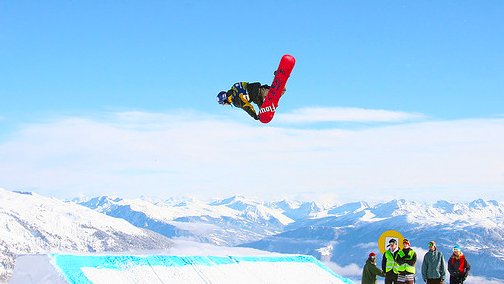 Like much of the UK, last weekend I was glued to the Olympic snowboard slopestyle from Sochi – and not just because Great Britain has a fighting chance of a medal for a change!

What gripped me from the start was the sheer enjoyment those young daredevils had in their sport. They really didn’t seem to care who won – all they wanted was to lay down a good run, do their tricks the best they could, and if that put them in the final, well, that was just awesome!

It seemed that every snowboarder genuinely liked and admired the rest,; there was no bad feeling, no begrudging interviews, no divas (apart from the one who went home saying the course was too dangerous), just fresh-faced energy from some highly talented and deceptively dedicated riders.

When the judges’ scores came in and it wasn’t quite what they expected (which was quite a lot of the time), they’d just shrug their shoulders and smile; no iceskating-style tears, no tantrums, no “you cannot be serious” throwing down of equipment,  – and no macho air punches when the scores were good, but instead, genuine squeals of delight.

And the icing on the cake was the commentators, sometimes so overcome with sheer enthusiasm that they verbally exploded, and full of such fun ways of describing people sliding down some banisters on a wide plank that it didn’t matter if you didn’t understand the difference between “winding down the windows” and being “a bit squirrel-y”.

If only all opera singers would be like that! No muttering at competitions about how so-and-so’s students always win. No moaning after auditions about the old youth v experience issue, but instead a smile and a shrug – and move in. I sometimes think singers forget the reason why we sing – we love it! Other stuff gets in the way I know (like earning a living for starters), but fundamentally we love the sensation of singing when the audience is with you and the performance is going well. Yes, we are all only one rail from a wipeout so to speak, but we can also see the golden hue of applause at the end.

So at Hatstand, we’re going to be more snowboard this year, and aim for a totally rad performance  when we land those arias and enjoy the wind in our (non-blond) hair.

And if occasionally it all gets a bit squirrel-y, who cares, we know we’re in good company!